The Grasonville Volunteer Fire Department was first established in the summer of 1958. There were 36 original charter members in 1958. These thirty six men, together with nothing more than a desire to serve their community, founded one of the finest fire companies in Maryland.

The thirty six charter members started with absolutely nothing more than a vision. Together, with the help of the County Commissioners, they purchased a fire engine from Civil Defense for $100. The members housed this engine in a garage behind the Grasonville Post Office. How did they respond to fires, one might ask? When there was an emergency, residents would telephone either Leonard Smith’s Store or Holly’s restaurant, where the members often gathered. In this modern era of Computer Aided Dispatch and Radio Pagers, anyone half way familiar with the fire service in days of old must shake there head in bewilderment, but it worked for them. 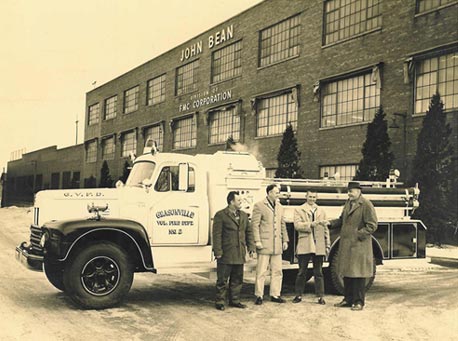 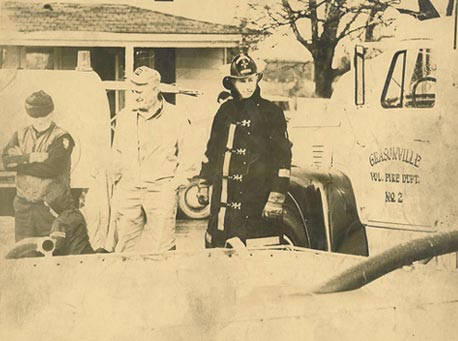 As our community grew so did the fire department, in 1960 Governor of Maryland G. Millard Tawes presided over the dedication of the Grasonville Volunteer Fire Department’s Fire Station (Queen Anne’s County Sta. 2). That Fire Station has remained relatively untouched for 45 years. When Oyster Cove was built, the Grasonville Vol. Fire Department underwent another massive change by adding a Truck company. The first Ladder Truck was purchased in 1986 from Owings Mills and was a 1957 Ward-LaFrance. In 1992 the Department purchased Ladder 16 a Seagrave from Manhattan NY. In 1998 the Department purchased its first new and current Ladder Truck, a 1998 105′ Pierce Quint (Ladder w/Pump). 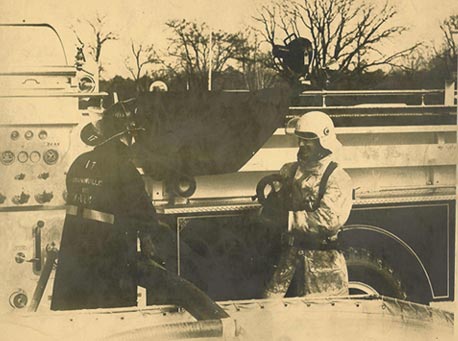 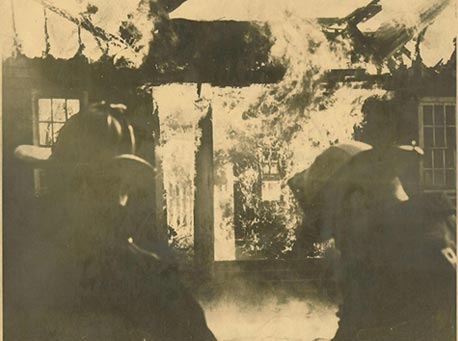 The Grasonville Volunteer Fire Department as it stands today has roughly 90 members, five major firefighting/rescue apparatus, a brush truck, a fire boat, and more importantly, the respect and admiration of the community we serve. The Grasonville Volunteer Fire Department has had only Six Fire Chiefs in 54 years, the 6th and current Chief Jason Anthony, Sr. is aware of where we have come from and looks forward to the future. He looks forward to the replacement of the Fire Station. The fire service has changed dramatically in only 54 years. Firefighters now are expected to handle hazardous materials calls, complicated rescue situations, and calls involving weapons of mass destruction. It is a very different fire department from the one that was founded in the summer of 1958, and the days of responding in a $100 fire engine from the back of the Grasonville Post Office. Our Fire Department has progressed to responding in half a million dollar fire apparatus to an ever changing community. The one thing that has always remained constant, is the same thing that the charter members had at the very first meeting in the Knights of Pythias Hall Lodge no. 115, the desire to serve their community.

The current Department members are dedicated to remembering those who came before us and blazed the trail that we continue to follow, our Charter Members.

Yesterday afternoon just after 4 p.m. brought the Grasonville Volunteers back out to Rt. 50. This time it was in the Eastbound lanes at Station Lane. Units arrived to find a Tractor Trailer with the trailer brakes on fire. There was no extension into the trailer and the assignment was held to Engine 25, Truck 2, and Engine Tanker 2. Captain Tilghman had the Rt. 50 Command. ...

Just after 9 a.m. yesterday morning, E-22, E-25, Truck 2, and Chief 2 responded for a MVC with Entrapment on Rt. 50 WB in the area of VFW Avenue. PM-300 came upon the accident enroute to another call and requested the Rescue Box assignment. Units arrived on scene to find a single vehicle MVC, requiring the driver to be extricated from the vehicle. We were assisted by @queenstownvfd Rescue 3. Crews utilized @hurstjawsoflife to extricate the patient and once extricated the patient was transported by Maryland State Police - Aviation Command Trooper 6 to Shock Trauma in Baltimore. Chief Anthony had the Rt. 50 Command. ...

Just before 6 pm last night, Engine 25 was dispatched to a building fire in Centreville. Arriving units from @goodwillfireco arrived on scene with a one story garage with smoke showing. Crews made entry and located a fire in the closet. The crew from Engine 25 assisted with opening up and overhaul for roughly an hour before returning to Grasonville. ...

On Friday around 1 p.m., Units from Grasonville and surrounding companies were alerted for a house fire at 232 Prospect Bay Drive West in the 2-16-1 Box. E-25 arrived on location with smoke showing from a Large 2 story Single Family house that was under construction. Crews found fire on the first floor and basement just inside of the front door. A 2nd Alarm was requested due to the size of the house and additional staffing. The fire was knocked down and Command held the 1st Alarm assignment and 3 Engines from the 2nd Alarm. Engine’s 25 and 22, Rescue 2, and Engine Tanker 2 responded on the assignment (Truck 2 was OOS for Routine Maintenance) Chief Anthony was the incident commander. ...

Just before 8 pm last night, units from Grasonville were dispatched for a MVC unknown on injuries on RT50 Westbound. Rescue 2 and Chief 2 arrived to find a two vehicle accident. The crew from Rescue 2 was checking on injuries and found two trapped in one of the vehicles. The crew on the Rescue started to work on stabilization and preparing to extricate the patients with Hurst tools. At that time Engine 22 arrived handling the passenger side while the crew from the Rescue worked on the driver side. After extrication both patients were turned over to EMS. ...